Decision making - If Then Elseif Else

Action-level conditions allow you to control whether or not an action triggers the actions that are connected to it.
The condition is entered via "Set Condition" in the context menu of the action. The dialog that appears has a field in which you can enter the condition. After it was initially entered the condition appears in a text field in the action's slot and can be edited there. Also, the action's icon changes from an arrow to a question mark.

How the condition is interpreted depends on what was entered. In the simplest case, the condition consists of a single numeric value or a single string. In this case the condition mechanism will compare the first parameter of the action to that value. Consider an action called A(val1, val2), i.e. with parameters named val1 and val2. If a condition is set for this action with just the number 23 then the condition will be met if val1 equals 23.

If several values are entered then the parameters are matched one after the other. In the example above, entering "23, 87" (without the quotation marks) would lead to a condition that is met when val1 equals 23 and val2 equals 87.

These kinds of conditions are generated by the system when it detects that only individual values and comparison operators have been entered. In principle, though, conditions can contain any valid Lua code and, when this is detected, the condition is used exactly as entered. For one thing, this gives you more freedom in relating goal values to parameters. For example, you could enter "val1 > 23 or val2 == 90" (without quotation marks) to create a condition that is met either if val1 is greater than 23 or val2 is equal to 90.

Beyond referencing the parameters you can also run other code as part of the condition. For example, assume you have an action getSeconds() in a module called TimeInfo that calculates a number of seconds and returns that number by using the Lua return statement as its last line (for the sake of this example the reasoning behind TimeInfo.getSeconds() is not important, it is just a stand-in for any action that returns a value that we are interested in). If you need a different action to only trigger its connections when the time has reached a certain value you could enter "TimeInfo.getSeconds() > 30" (without the quotation marks) directly into the condition. Now, when the action is run, the condition evaluation will ignore the passed-in parameters. Rather, it will run TimeInfo.getSeconds() and only consider the condition as met if the value it receives from getSeconds() is greater than 30.

set input into an action to action(value_name) 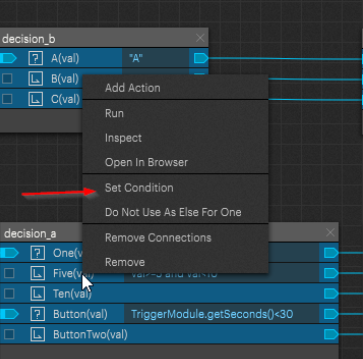 set the confition into the created field.

set variable corresponds to is equal to.

You will need to type strings with parenthesis:

"car" will trigger the output if input string is car

Nested and/or conditions will need the mention of the value_name:

A condition can be a complete API call or can get its information from another action and or module.

The code in the "getSeconds" action could be (example):

Create a second action with action_name2(value_name2)

choose set as else for action

No input field will appear as all other terms of upper condition will end up in the else part of the condition and trigger the output. 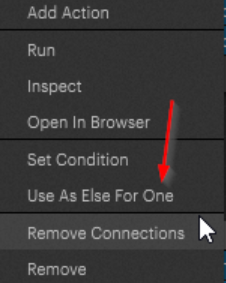 To create an elseif for the action_name2 you will first need to create the else statement as mentioned above. If you do not do this you will create a new condition that is not connected to the upper condition. Now do a another right click and you can add the condition that will be used as the elseif statement 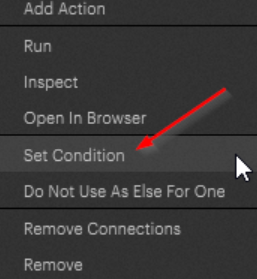