Until now, Actions had no real purpose other than forwarding values and acting as connection points for Buttons. However, Actions can execute whole programs and control many different things at once. All previous examples could have been realized in just one Action without the need of drawing a wire mesh, which can become confusing over time.
There are two tools in Control for defining the functionality of an Action. The first one is the Scripting IDE which support LUA as a scripting language. The second one is the Block Builder, which is a graphical representation of the Scripting IDE. Instead of writing code, blocks of commands can be connected with each other to define the behavior of the Action. It allows a fast realization of simple tasks, but is usually not sufficient for advanced projects.

Creating a PAUSE Button with the Block Builder

4.    Save your changes in the Block Builder.

5.    This does basically the same as drawing a wire from your Action to the “Pixera” Module and connecting it to the “pause” property of the timeline.Connect your Action to a Button and try it out.

Using Conditions in the Block Builder

To create a Condition, right click onto the plus symbol and select “Add Condition”.

The current condition will execute the next command if the transport mode is playing. To define this conditional command, press on the indented plus symbol.

If the command is executed, we know the timeline is currently playing, so we want to pause it. Therefore, we are calling the pause property of the timeline.

Creating a PLAY/PAUSE Button in the Block Builder 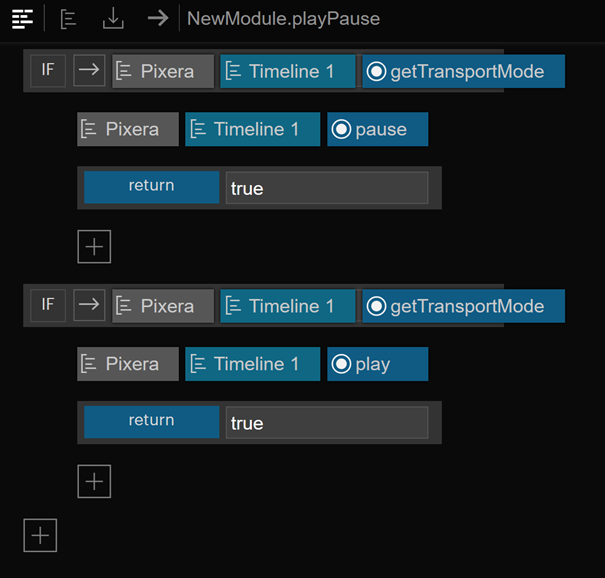 Most projects can be realized using only the Block Builder, but there are some situations where this tool finds its limits. For instance, it is not possible to define variables in the Block Builder, therefore Control has its own Scripting IDE. Scripts are written in LUA, a lightweight programming language comparable to Python. Thus, complex projects can be realized in a quick and straightforward manner.
Traditionally the first thing to do when learning a new programming language is displaying “Hello World!” on the screen. Therefore, we need to use the Log which is used to monitor the execution of your project. Data from your Actions (e.g., warnings and errors) are shown in the Log. To open it, press “Show Log” in the upper right corner above the viewport. You can choose the position of the Log on the screen.

Moving to a slightly advanced example, we want to play and pause the timeline with a single Button. This means we want an action that starts the timeline if it is not running and pauses it if it does. To achieve that, we must again use Conditions.

Every Action can both receive and send multiple values, which we call Input and Output. The default setting is that “everything that goes in comes out”. For instance, if you name your Action “play”, Control will create the Action “play()”, which we connect to a Logger Module that displays the Output of an Action.

This Action has no defined input variable – signified by the empty parentheses - and therefore all input values are directly channeled to the output. This setup may be sufficient when used to e.g. pass slider data, but not if you want to modify the input values inside your Action. Therefore, we must define input variables. This is simply done by naming an Action “play(x, y, z)”. The Action now possesses three input variables called x, y and z, which allows us to address the input values by these names.

The Output behavior can be modified by using the following command, which we write into the Action.

“callRefs(y)” defines that only the input variable “y” is passed to the Output, which can be tested with the “Run”-operation, by passing 3, 4 and 5 to the Action. Now only 4 should be forwarded to the Output.

However, sometimes it can happen that you must process your input variables, but you don’t know the number of variables you’ll need. In that case the three dots (…) come in handy. They function as a placeholder for a variable number of arguments. Just rename your Action to “play(…)” and modify “callRefs()” to:

This will forward all input values to the Output and is basically the default behavior, but if you want specific values from the one-based input stream use:

This will forward the first and the seventh value of all input values to the Output.

In some cases, you might even need an Action that receives input but doesn’t send Output. This can be realized with the following command:

Now all Output of the Action is blocked:

Our next project is a slider that allows us to switch between all the cues on the timeline.